Contents of the tomes of the Time of the Naguals : Around Burroughs and Gysin Articles Short stories Poems

Paul O'Donovan: "Beyond The Hyacinth House"

Well, many new things again since the latest report: visit of Zoners for 12th anniversary of Interzone, a new site for Interzone Editions, another one for the music compilation Interzone CD1, and more about the next publishings.

Also a number of exhibitions in the Zone.

Visit of Vasha and Egle:

In the begining of August, Vasha and Egle came to visit, on the way from Portugal to Lithuania. We had a wonderful weather so it was a holiday time for the three of us, while a great context for the 12th anniversary of the Zone.

On saturday October 10th I'll make an exhibition on the dreamachine in Airvault. I'll make a video and photos and shall forward the info in the next report.

I have created a new site for Interzone Editions at http://interzoneeditions.livres.officelive.com/ , which was hosted before at www.inter-zone.org/editions.htm .

As English books are being published, I'll make an English version of the site. At the moment, see the pages :

At the moment, here are the publications to come:

Compilation of interviews, articles and texts by Willi

"The Time of the Naguals":

Compilation in English of Interzone wirtings. It contains 7 tomes. Too big to be printed, each tome is published in pdf file on a CD.

- "Around Burroughs and Gysin" http://aubert.isa.googlepages.com/aroundb&gcontents.htm

- "Research": not finished yet.

Document on psychiatry. A previous version has been hosted in Interzone Library at http://www.geocities.com/interzonelibrary/0Sommaire.html. The published version will contain some more chapters.

Some chapters have been translated in English, some of them by Jill Fryer who revised my previous translation. The first one I wrote was in the early eighties, and was written directly in English, for William Burroughs : it was a translation of the transcription from a recording of a schizophrenic man explaining his system of inner perception : see "Mr B" http://www.geocities.com/interzonelibrary/13mrbeng.html

This book contains investigations on market economy realized since 2003, a number of which are on line at http://semantiquegenerale.free.fr/enquetes.htm The version to be published is a revised version, not ready yet.

This compilation was realized in 2000 : see the report of November 2000 at http://www.inter-zone.org/reportnov00.html Originally it was a group experiment of selfproduction at the scale of Interzone: we wanted to try to get organized at the level of the Zone to produce ourselves our creations, and it did work: a real compilation came out of it. It was gathered by Steve Ray, whom the musicians sent their song to, and who put it on line then in the site "Interzone CD Project" which does not exist anymore. As we had no individual CD burner yet at this time, Paul Sinclair, who was working for a CD burner society, made about 20 copie of the CD, one for each participant.

Since it has been stopped. Each musician was free to do what he wanted with his copy: put it on line, copy it and stread it, etc.. With Interzone Editions, I can now publish it officially. It contains the CD of music and a booklet with the illustrations each musician sent with his song.

I have sent a mail to the people who where involved in it then, but it's not easy to join people after 9 years. I intend to go on with the experiment at the financial level: how much shall we sell it ? What shall we do with the money ? There are questions I cannot answer to alone.

I have created a site in MySpace to host some of the songs : see Interzone CD1: http://www.myspace.com/interzonecd1 If you are the author of a song of this compilation, please let me know if you allow me to upload it in this Myspace site. You already gave it when the CD was originally produced in some copies, and put on line in the site Interzone lotsarock but you might have changed your mind about the contents, or want to change your song.

The article is on line at http://www.chicagoreader.com/chicago/william-burroughs-unabridged/Content?oid=1186237 with more photos and video. 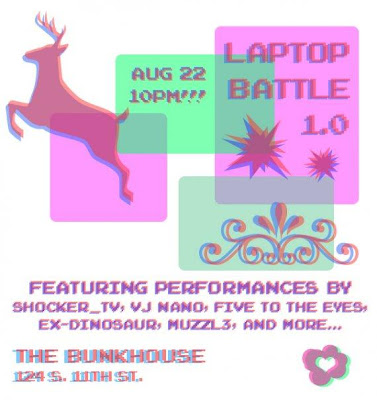 The Wire magazine has a feature Jajouka in its Global Ear section by Lisa Blanning who attended this year's Master Musicians of Joujouka Festival, June 5-7. Lise stayed with leader of the Master Musicians of Joujouka, Ahmed Attar,and obviously enjoyed her stay in the village and the music and people she encountered there . The Master Musicians are proud for the offer to allow a free download and music stream on The Wire magazine website which will be permantently available on http://www.thewire.co.uk/articles/3035/ The download is a preview , rough mix, of the first ten minutes 23 seconds of the recording of the Brian Jones 40th Anniversary Festival, main night poerformence. This performance started 40 years to the hours after Brian Jones recorded the seminal Brian Jones presents the Pipes of Pan at Joujouka LP in 1968. This is the start of the Boujeloud performance and is a rough mix of an edit from a continuous performance that lasted over 1 hours 30 mins. It was produced by Frank Rynne and engineered by David Slevin. Title Habibi Wan Amali / My love what more have I/L'Aita /The Call Artist The Master Musicians of Joujouka The Master Musicians of Joujouka/Jajouka on this recording are Ahmed El Attar drums El Kahil Radi drums Mustahpa El Attar drums Ahmed Bouhsini rhiata Mohamed Mokhchan rhiata Abdelslam Errtoubi rhiata Abdellah Ziyat rhiata Mohamed El Attar rhiata Mohamed El Tahami rhiata http://www.thewire.co.uk/articles/3035/ Buy the October 2009 issue of The Wire for Lisa Blanning's article reporting on the 2009 festival.

The Whirling Dervish: Message from the Joint Chiefs of Staff

It is with both happiness and sadness that we announce the end of a long and meaningful relationship. Although we mourn the end of seven years we are all excited about pursuing our individual musical directions and likewise can't wait to share t...hem with you. Thank you all for years of dedicated participation in The Whirling Dervish, and for all of the amazing times.
www.myspace.com/thewhirlingdervish 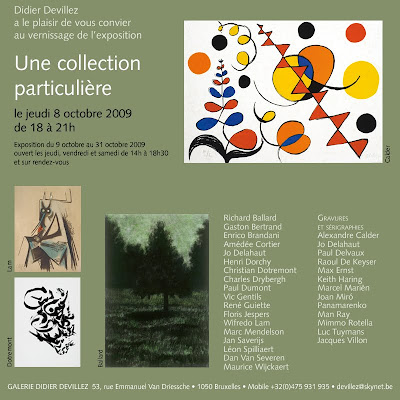 From Noëlle Pujol : The Invisible Generation in Melbourne


The Invisible Generation (TIG) is a series of contemporary art interventions organized by Vision Forum and inspired by texts by American writer William S. Burroughs. The project will primarily be made up of unannounced performance-based interventions in the public space in Beijing, Melbourne, Shenzhen and Kiev.

A large number of interventions will be introduced at the Anti-Hospital hosted at the Margaret Lawrence Gallery in Melbourne from September 7h to October 10h, 2009. The actions take their starting point in an experimental and evolutive exhibition made up of various elements including two installations: Polka Dot by Mark Geffriaud and Do Not Go Gentle Court, a site specific piece by Per Hüttner.

The Anti-Hospital and TIG Archive in Melbourne

The projects in Melbourne do not have a definite starting point or public opening. They are built around a number of events, evolutive interventions and social platforms which together create new vantage points to what an exhibition, performance or workshop can be.

The Anti-Hospital will be the central to coordinate various activities and to host social events that replaces the traditional opening. The production and installation of the exhibition becomes public and part of an open-ended process. The gallery is the locus where a large group of artists and other cultural practitioners together develop different interfaces to connect the inside of the gallery awith the outside world, allowing viral forms of art to infiltrate the surrounding city and the lives of its inhabitants.

The Anti-Hospital also includes an archive of artistic documents providing instructions on performances, workshops and actions to be realized primarily in the public space and in an everyday context. The instructions are formulated as possible actions, performances, temporary artworks, objects and social situations, scores and sonic interventions proposed by absent artists and realized by local artists, non-artists and the visitors the gallery. Instructions also include Burroughs's own suggestions that can re-interpreted and re-enacted by visitors to the gallery.

TIG Anti-Hospital will act as a platform to re-distribute artistic actions in the social space of the city. Through this process, the artwork is transformed and the notion of authorship is re-negotiated between the passages of instruction, interpretation and realization. The instructions will be exhibited in the gallery, and the display will include new ones collected in Melbourne, as well as documentation about the realized actions.

In dialogue with the social interventions two main installations will be presented in the gallery :

Do Not Go Gentle Court, a new site specific piece by Per Huttner. It both blocks out the daylight in the space and at the same time uses quantum physics as an inspiration to invite the audience to re-negotiate and rethink the relationship between the living and the dead.

Polka Dot, by Mark Geffriaud: is an installation which uses our visual perception to play tricks on our minds. It uses the dark and a strong light source to rethink how meaning is created in cinema, history and its connections to technological progress in general and our views on our solar system in spec

Scheduled activities include: the Laoban Speaker Workshop,coordinated by Jon Phillips, the Stethoscope performance by Yan Jun, The Sunday Anti-Olympics, Calaibi Yau actions, and several actions connected to the instruction archive. For updates keep your eyes peeled on the TIG blog.

-----
The Invisible Generation: a project by William S. Burroughs filtered through time and Per Hüttner and Daniele Balit.
web: http://theinvisiblegeneration.blogspot.com
mail: vfprog@gmail.com

Organized by: Vision Forum in collaboration with VCA Margaret Lawrence Gallery and Satellite in Melbourne, Les Kurbas Centre in Kiev, CPU 798 in Beijing and OCAT in Shenzhen.

A special thank you to FRAC Île-de-France. 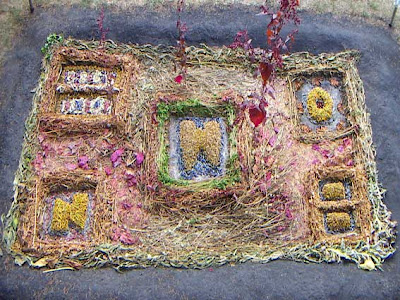 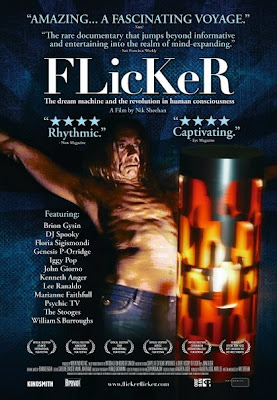 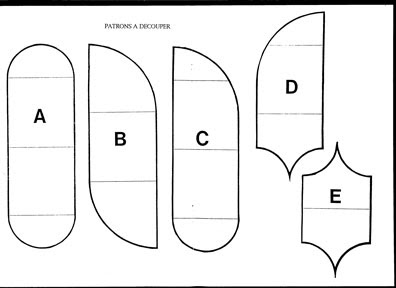 The Time of the Naguals:

- " Around Burroughs and Gysin" http://aubert.isa.googlepages.com/aroundb&gcontents.htm

- "Research": not finished yet.

In the other Zoners' sites :