Due to problems of sending and reception of mails, I created a forum allowing to comunicate without mails, and to host many pages.

It contains a chat-room, galleries, ald allows to communicate through private messages.

A tool which fits very well to Interzone needs.

It contains a number of rubrics which can be modified.

Do not hesitate to register and send your infos there.

To register, click on "Register" in the menu, introduce a pseudo and password. Then validate your inscription by mail. 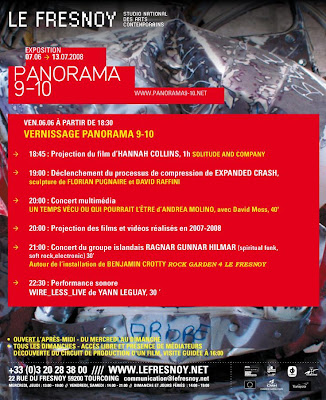 ---
Hello,I 'm glad to invite you to "Panorama 9_10" exhibition, which takes place from 7th June to 13th July at Fresnoy, in Tourcoing (France). The preview will be on 06 th June at 18.30. At that occasion, you will discover "Calypso" installation, my last creation.
Looking forward to meeting you.
Best regards.
Anthony Rousseau
Extract
Publié par Isabelle Aubert-Baudron à 10:55 Aucun commentaire: 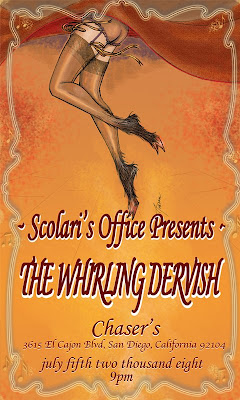 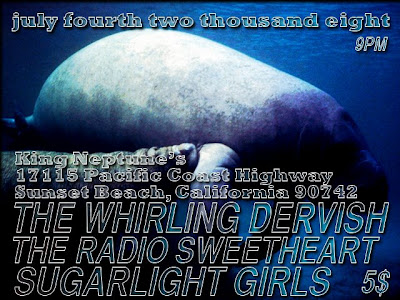 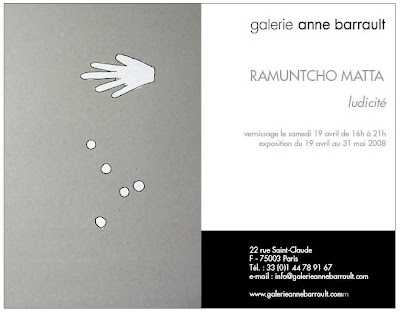 Les artistes dans le livre sont :The artists in the book are:

Hey all! Soooo this Saturday, I have an event coming up in which both my paintings and my writing will be featured. would love to see youthere unless i am trying to avoid seeing you at all, in which case youare certainly not receiving this email because i totally checked thelist like 4 times. that said, you should come. it will be a lot offun. I am attaching the flyer because it has more info than i amincluding here. mhmm. look at me being not so informative. whatever,here's the day and time and a couple other informational vittles.music. did i mention music? [you should all take a second to look atthe flyer because jay is pretty much awesome for helping me make itall neat 'n' stuff. yay jay.]

This Saturday, May 17th @730pm
Exhibit A Gallery and Works of Art present:
SPRUNG!
A Saturday night of Art &Poetry AtWorks of Art Salon
hosted By Brendan Constantine.
at 7 pmWorks of Art4655 Hollywood Blvd [upstairs].
Los Angeles, CA(213) 590-6990
Featuring Art Work By:JSON
Bob Nyebe Corrie Greathouse
Sita Kaylinand Words By:Corrie Greathouse
Karen Harryman
Saria Idana
Jennifer Lively
--
"but what is happiness except the simple harmony between a man and thelife he leads"?a. camus-- everything or nothing at all.
agentofdiscord.com

Optical Sound: May Be

Brian Jones 40th Anniversary in Joujouka
A once-in-a-lifetime chance to experience a day and night in Joujouka as guests of the Master Musicians of Jououka and their families on 29th July 2008.

The story
On 29th July 1968 Brian Jones came to Joujouka with Brion Gysin, Mohamed Hamri and engineer George Chkiantz to record an album with the Master Musicians of Joujouka.
The resulting LP was the first release on Rolling Stones Records in 1971 "Brian Jones presents the Pipes of Pan at Joujouka".
To mark the 40th anniversary of this historic recording, the Master Musicians of Joujouka are staging a celebratory festival on 29th July 2008. The musicians will perform the Sufi healing music of Joujouka and, after dinner, the night will be filled with a full performance of the musicians' Boujeloud Rite, which is likened to the ancient Rites of Pan.
Joujouka is a farming community with strong Sufi traditions, located in the Ahl Srif Mountains some 80 km south of Chefchaouen and 20km from Ksar El Kebir.It is a halal village; therefore, both presence and consumption of alcohol is strictly forbidden.

Food and board
Accommodation will be provided in traditional Joujouka houses with the musicians' families. This is a unique opportunity to experience a festival in the village and Joujouka life.
Full board will be provided: lunch on arrival on the 29th, a celebratory meal in the evening, and breakfast on the morning of the 30th. All the dishes will be prepared by the villagers and will be traditional Moroccan fare for a celebratory feast.
The people of Joujouka are renowned for their music and their cooking.
Places are limitedThis once-in-a-lifetime experience is available to a strictly limited 50 places. This is due to accommodation limitations in the village, which is 20km from the nearest urban centre.

Travel arrangements
Ticket holders must make their own way to Ksar El Kebir.Ticket holders will be transported from Ksar El Kebir's main train station ("Mouley Mehdi") at a designated time on the morning of 29th. Return transport to Ksar El Kebir will be provided on 30th to meet connecting trains.Grand taxis, and buses also serve Ksar El Kebir.
The price for this unique experience is €250 per person.Information available from joujouka@gmail.comBooking at http://www.joujouka.net/

MAGIC calls itself The Other Method for controlling matter and knowing space. In Morocco, magic is practised more assiduously than hygiene though, indeed, ecstatic dancing to music of the brotherhoods may be called a form of psychic hygiene. You know your own music when you hear it one day.You fall into line and dance until you pay the piper.
My own music turned out to be the wild flutes of the hill tribe, Ahl Serif whom I met through the Moroccan painter, Hamri. He turned me on to the Moorish fleshpots, the Magic and the misery of the Moors. The secret of his mother's tribe, guarded even from themselves, was that they were still performing the Rites of Pan under their ragged cloak of Islam.

Westermark, in his book on pagan survivals in Morocco forty years ago, recognized their patron: Bou Jeloud, the Father of Skins, to be Pan the little goat god with his pipes. An account of their dances led him to conclude they must be celebrating the Roman Lupercalia which once occurred in the first two weeks of February, but attached itself to the principal
Moslem feast when the Arab invaders turned the calendar back to the lunar year. Westermark
never saw the dances and believed they no longer took place. Pan may soon stop dancing in the Moroccan hills but I first saw him there in 1950. Later I ran several times in the panic of the Lupercalia. It is the "holy chase" of which Julius Caesar speaks in Act 1, Scene
2 of Shakespeare's play: "Forget not, in your haste, Antonius, to touch Calpurnia; for our elders say the barren, touched in this holy chase, shake off their sterile curse." Marc Antony should be wearing a fresh, foul-smelling goatskin. "I saw Marc Antony offer him a crown; yet 'twas not a crown neither, 'twas one of those coronets. .."

Bou Jeloud wears a yokel's big, floppy straw hat, bound round his face with a fillet of ivy. ". . . it was mere foolery; I did not mark it." Elizabethan "Morris" dances were Moorish .
Pan, Bou Jeloud, the Father of Skins, dances through eight moonlit nights in his hill village, Joujouka, to the wailing of his hundred Master Musicians. Down in the towns, far away by the seaside, you can hear the wild whimper of his oboe-like raïtas; a faint breath of panic borne on the wind. Below the rough palisade of giant blue cactus surrounding the village on its hilltop, the music flows in streams to nourish and fructify the terraced fields below.
Inside the village the thatched houses crouch low in their gardens to hide the deep cactus-lined lanes. You come through their maze to the broad village green where the pipers are piping; fifty raïtas banked against a crumbling wall below sheet lightning to shatter the air. Fifty wild flutes blow up a storm in front of them, while a platoon of small boys in long belted white robes and brown wool turbans drums like young thunder. All the villagers, dressed
in best white, swirl in great circles and coils around one wildman in skins.
Bou Jeloud leaps high in the air on the music, races after the women again and again, lashing at them fiercely with his flails. "Forget not in your speed, Antonius, to touch Calpurnia . . ." He is wild. He is mad. Sowing panic. Lashing at anyone; striking real terror into the crowd. Women scatter like white marabout birds all aflutter and settle on a little hillock for safety, all huddled in one quivering lump. They throw back their heads to the moon and scream with throats open to the gullet, lolling their tongues around their empty heads like the clapper in a bell.
Every mouth is wide open, frozen into an O. Head back and hot narrow eyes brimming with dangerous baby. Bou Jeloud is after you. Running. Over-run, Laughter and someone is crying. Wild dogs at your heels. Swirling around in one ring-a-rosy, around and around and around. Go! Forever! Stop! Never! More and No More and No! More! Pipes crack in your head. Ears popped away at barrier sound and you deaf. Or dead! Swirling around in cold moonlight, surrounded by wild men or ghosts. Bou Jeloud is on you, butting you, beating you, taking you, leaving you. Gone! The great wind drops out of your head and you hear the heavenly music again. You feel sorry and loving and tender to that poor animal whimpering, grizzling, laughing and sobbing there beside you like somebody out of ether .Who is that? That is you.

Who is Bou Jeloud? Who is he? The shivering boy who was chosen to be stripped naked in a cave and sewn into the bloody warm skins and masked with an old straw hat tied over his face, HE is Bou Jeloud when he dances and runs. Not Ali, not Mohamed, then he is Bou Jeloud. He will be somewhat taboo in his village the rest of his life. When he dances alone, his musicians blow a sound like the earth sloughing its skin. He is the Father of Fear. He is, too, the Father of Flocks. The good shepherd works for him. When the goats, gently grazing,
brusquely frisk and skitter away, he is counting his flock. When you shiver like someone just walked on your grave—that's him: that's Pan, the Father of Skins. Have you jumped out of your skin lately? I've got you under my skin.
Up there, in Joujouka. you sleep all day—if the flies let you. Breakfast is goat-cheese and honey on gold bread from the outdoor oven. Musicians loll about sipping mint tea, their kif pipes and flutes. They never work in their lives so they lie about easy. The last priests of Pan cop a tithe on the crops in the lush valley below. Blue kif smoke drops in veils from Joujouka at nightfall. The music picks up like a current turned on. The children are singing, "Ha, Bou Jeloud! Bou Jeloud the butcher met Aisha Homolka, Ha, Bou Jeloud!"

On the third night he meets Aisha Homolka who drifts around after dark, cool and casual, near springs and running water. She unveils her beautiful blue-glittering face and breasts and coos. And he who stammers out an answer is lost. He is lost unless he touches
the blade of his knife or, better still, plucks it out and plunges it into the grcund between her goatish legs and forked hooves. Then Aisha Homolka, Aisha Kandisha, alias Asherat, Astarte, Diana in the Leaves Greene, Blest Virgin Miriam bar Levy, the White Goddess, in short, will be his. She must be a heavy Stone
Age matriarch whose power he cuts off with his Iron Age knife-magic.
The music grooves into hysteria, fear and fornication. A ball of laughter and tears in the throat gristle. Tickle of panic between the legs. Gripe of slap-stick cuts loose in the bowels. The Three Hadji. Man with Monkey. More characters coming on stage. The Hadji joggle around under their crowns like Three Wise Kings. Monkey Man comes on hugely pregnant with a live boy in his baggy pants. Monkey Man goes into
birth pangs and the Hadji deliver him of a naked boy with an umbilical halter around his neck. Man leads
Monkey around, beating him and screwing him for hours to the music. Monkey jumps on Man's back and screws him to the music for hours. Pipers pipe higher into the air and panic screams off like the wind intothe woods of silverolive and black oak, on into the Rif mountains swimming up under the moonlight.