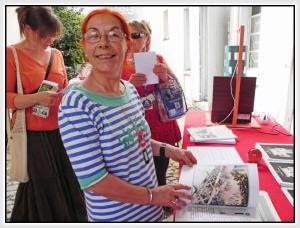 Hello Fellow Dadaists:
3RP Co-directors  Co-editors of Maintenant 8 Kat Georges Peter Carlaftes are so happy to announce we will be performing with so many of our contributors on Saturday, September 20 in Brussels/Jette at 7pm:

and on Friday September 19, 3RP will have the European Book Launch Premier of Philip Meersman's THIS IS BELGIUM CHOCOLATE at  8pm.
Please share with all your European Fans & Friends
-Thanks, Kat & Peter

A.D. Winans: FOR THE PEOPLE ON THE MOUNTAIN

lift your spirit as high
as the mercy airplanes
dropping food and water
to the 40,000 Iraqui
men women and children
seeking reguge from yet
another religioius sect
bent on genocide
in the name of their
invisible God

Give America A Break: a tribute album to Jack Micheline

Give America A Break is a tribute album to Jack Micheline released on both vinyl and digital format. The vinyl version is a double-album, colored 180 gram virgin vinyl with a gatefold design. The double-disc CD contains bonus material not included on the vinyl.

The first half of this album includes some of the best of Micheline's readings throughout the years including tracks from the famous 1982 Naropa reading where he selected as the best reader of the weekend which was the first annual Jack Kerouac conference. The tracks vary form solo readings to duos with Micheline's long time tenor man Bob Feldman. Also included are excerpts from an interview conducted in 1980, by Gerald Nicosia, fully displaying Micheline's acerbic wit, razor sharp mind and visionary outlook on American consumer culture.
The second half of the album features over three dozen poets and friends of Micheline's reading his works, poems in tribute or sharing remembrances. These recordings took place around the country including New York, Los Angeles the Bay Area and beyond.
Some of the poets recorded for this album include: Neeli Cherkovski, Alan Kaufman, David Meltzer, Anne Waldman, ruth weiss, steve dalachinsky, A.D. Winans, Eddie Woods, Andy Clausen, Amiri Baraka, Yuko Otomo, Eric Mingus, Charley Plymell, Q.R. Hand Jr., Bob Holman, S.A. Griffin and many more.
The August 9th record release party at Project Artaud in San Francisco will feature ten of the poets on this album reading in between tracks being played from the album. The event is held at the studio of Phil Deal, a horn player who used to back Micheilne years ago. In fact, Jack Micheline himself has performed at this very studio at Project Artaud.
For more info visit unrequitedrecords.com
Publié par Isabelle Aubert-Baudron à 11:17 Aucun commentaire: