Yes, in a little more then a week we will celebrate for the benefit of
our crazy bilingual paper: LE BATHYSCAPHE.


Montreal is French and English, Montreal is at the crossroads of Europe and America :
LE BATHSCAPHE rides on that spirit.

Now, as always, LE BATHYSCAPHE is published without grants or publicity : you are the only propeller!
Come and party with us on sunday may 12th 2013 at Sala Rossa in Montreal, you won't regret it!

SUNDAY MAY 12TH, doors at 18h, starts at 19h30 :
Legendary american poet CHARLES PLYMELL will read, backed by MAURO PEZZENTE (GYBE) on bass.
Critic and poet BYRON COLEY will read, backed by BILL NACE (Body/Head, Vampire Belt) on guitar.
GABE LEVINE (Sackville, Black Ox Orchestar and his own great solo album) will pay a rare visit to Montreal.
GREG WEBBER and his group KILL CHICAGO will burn.
MYRIAM GENDRON will sing from her Dorothy Parker project, backed by LAURENCE GENDRON on cello.
URBAIN DESBOIS will present DELATOURETTE his new insane Ex type band.
LE CLOU DE LA GANG are wild ( new project from cabaret crazy members of L'Orchestre des Hommes Orchestres who just turned the province upside down with their Tom Waits and Kurt Weil shows)
At the end of the evening, the craziest dj's around : ROYAL AIR TOGO will take possession of your bodies and souls.

All this for a mere 15 dollars that will keep LE BATHYSCAPHE out of trouble and in deep waters for a few years. 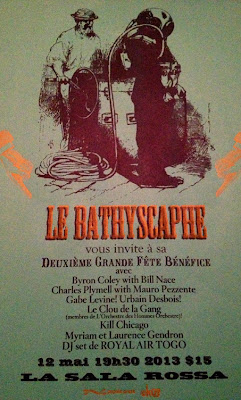