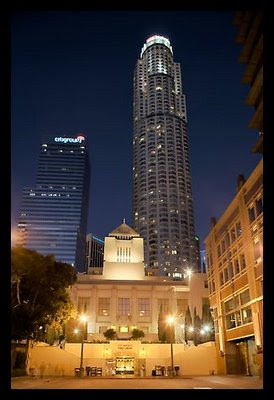 Los Angeles Central Library
081125
I was at a bit of a loss when I really thought about it, "I've lived in Los Angeles for three years now and I've never crossed the threshold of the LA Central Library."
It boggles mind, non?
So on the occasion of on Ms. Kane's birthday I put a plan into action to rectify my strange bibliophile virginity (*ahem*). November had dipped back into summer time temperatures for several weeks. Blazing heat and sunlight all day and then warm t-shirt weather through the night. As Katherine's birthday neared the temperature began to relinquish and then dropped, in toto, to winter conditions in the sparked light between dusk and twilight. With the cool weather came Los Angeles' casual flirtation with rain. Though we have been much deprived this year, I still held out, hope against hope, that soon the sky would crack and the floodwaters would rush in and clean our fair city, ceiling to gutter.
The sky remained an intense grey as I slipped out to Van Nuys to pick up Ms. Kane. I retrieved her in a rush and we flew back into the city. While I pretended to finish my work day Ms. Kane busied herself with fantasies of tentacles and the lines only a woman possesses.

When the clock struck four, we rushed from the Taft Building and onto Hollywood Blvd. Since I was deemed concierge for a Brooklynite I considered it apropos to introduce her to the (mostly worthless, but still enticing) Los Angeles Subway. We breached the Earth's surface and followed the clicking stone stairs down into the bowels of the city. She marveled at the cleanliness, but reminded herself that in comparison, LA's underground had a century to catch up to New York's historical filth.
We were soon climbing toward the Nimbus ceiling again and emerged into a frigid but crowded Pershing Square. Though I keep an excellent sense of direction at hand, (possibly sub-consciously) I neglected to take a close look at our travel route from subway to Library. No bother, both of us quite like the idea of wandering around downtown LA on foot. Clearly, we are not natives...
Night had fallen in dark heavy sheets and as we turned the dead-end corner of Hope St. Ms. Kane buried her head in my shoulder and giggled. She knew exactly where I was taking her now.
The Central Library bursts majestically skyward from the dull asphalt of Hope St.'s end. We ascended the South staircases and resigned to have cigarette before losing ourselves in the stacks of human thought. Most people are unaware that a great deal of filming for movies, TV, et cetera, based in "New York" actually takes place in downtown Los Angeles. The cool air, glass and steel facades, and sparse vegetation screaming between the cracks of enormous and archaic stone, make the City of Angels New York's bastard sibling, left for dead, on the trail toward the 49'er rush. The stone work on the sides and eaves of the building are mesmerizing, spanning mythologies of ancient cultures and minor historical references to the 1920s.
We quietly slipped into the monolithic building and located a map. We both had several floors to visit and decided to divide and conquer. The enormous ceilings, glass walls on every level and the breathtaking main foyer containing the bulk of modern escalators were nearly unbearable visual stimuli. I found it difficult to concentrate on searching for books in the midst of this enthralling structure. I spent the majority of my time there looking up and around and missing the stacks of books altogether.

After three hours we called it quits and headed back into the night air. We swiftly arrived at, and dipped underneath Pershing Square to wait for a ride back to Hollywood. Owing to color confusion we ended up riding the wrong train to South Downtown. For the first time I witnessed MTA cops asking for tickets as people slowly walked up the stone stairs to the street. We got back on the train, headed in the right direction this time...and finally arrived back at Hollywood & Vine. Katherine felt dripping water as we walked up the stairs, but dismissed it as urban perspiration. When we hit street level we were both awash in a freak Los Angeles downpour. The whites, yellows, blues and reds of Hollywood traffic jams and storefronts danced on an endless glass surface. The pitch black of sidewalk and asphalt glowed with wet reflection and the famous intersection was alive with dancing color and rushing rainwater. Owing to my special brand of boyscout paranoia, I had an umbrella under my arm and we stepped out into the fray like professionals...dry professionals.
Subway...
Los Angeles Central Library...
downpour in Hollywood...
somehow, I think it must have been my birthday as well.
Publié par Isabelle Aubert-Baudron à 18:15