A UPDATE ON ARTIST S. CLAY WILSON by LORRAINE CHAMBERLAIN 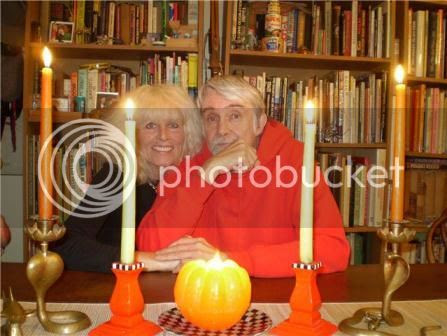 I have been flirting with S Clay Wilson for forty years, lived with him for ten, visited him in the hospital every day for a year, and brought him home to take care of six months ago. It is a daunting task. But one I have been and will continue to be devoted to every day. He is changed in many ways, but I find it easy to love this New Wilson as much as the Old One. This version is more tender and sensitive, although on occasion he can be just as stubborn and difficult as he always was.


Wilson was not in a bar the night his life changed. He was trying to get home from a friend's house. We have never known if he fell or if he was beaten up. He certainly looked like he'd been attacked, covered with bruises, cuts, a fractured orbital bone with bleeding in three hemispheres of his brain. Some good samaritans discovered him unconscious, face down between two parked cars in the rain. We have never found out who these people were who saved his life by calling an ambulance, waiting for it to arrive so they could find him. I scoured that little street days later, asking people if they knew who did that, in order to thank them. Several people had heard about "the guy who got beat up" on their street, but knew nothing more. We will never be certain of the cause his wounds. He suffered a severe, traumatic brain injury that night, and at first it didn't show.

Wilson was in a coma for three weeks until he was taken off the ventilator. They had removed it once before in the first week, but he failed this breathing test and had to be intubated again. He suffered from a bout of pneumonia after that, so it was frightening when the neurosurgeon told us he may not make it when they removed the machine again. Thankfully, he gradually opened his eyes and continued breathing on his own.

We had no idea how severely impaired he was for many months after that day. Always an uncooperative personality, many times he told people to 'get lost" when they came to visit. Some took it personally, some blamed it on me, and some let it roll off their backs to return another day for a more successful visit. He had bouts of outrage when he was in the rehab facility, trying to escape with all of his belongings crammed into the legs of a pair of sweats, like a duffel bag. He spent days ranting about vivid characters and scenarios not based in reality. It took me awhile to realize that many of these wild delusions were really "verbal drawings"...not hallucinations at all. He couldn't draw them, so he spoke them.

It took several months before he could even write his name. I brought him a small sketch pad which he kept close by but left blank. One day I looked in it to discover his famous signature! It brought me to tears, offering hope for the first time about his ability to draw again some day. Soon after that we discovered a face he'd drawn on an easel in the dining room. A friend thought it looked like me. Two days later, I discovered four Checkered Demon faces on the same easel. I saved these little gems to show him later, thinking we would have a great laugh at their simplicity.

In the ensuing month he surprised us all by completing a fantastic color piece he titled "Lots of Pirates" . After three months he was moved to another facility and stopped drawing. It took awhile to realize this was because he didn't have the right furniture. I arrived one day with a lamp and a high stool to place in front of a raised table, much like his arrangement at home. He was off and running, drawing for hours at a time in the following months. But his feverish output died down after ten drawings.

Since returning home, he spends many days drawing, followed by days or sometimes weeks off. He has completed several remarkable pieces here at home, but said recently that he is weary of his characters. This worries me, of course, but I do not nag him. I try to keep him engaged in any way possible, exercising, walking, and visiting with his friends. We go to museums and galleries together, and once in awhile to a matinee. He loved Avatar and Alice in Wonderland, as well at Crazy Heart.

He remembers many old pals as well as his sister, but the mystery of his impairment has caused him to obsess about old slights and misunderstandings.( I have tried to get him to ease up on this attitude,but so far, regarding some people, to no avail.) He can recall much of his intellectual knowledge about art and movies. He never watches tv, having been a terrible snob about that all his life. But we haunt the libraries, renting up to 20 movies at a time. I do not allow him to lie in bed all day watching them. We begin viewing at around 4pm most days, and by 9 pm we may have completed three films before going to sleep.

Wilson is not a blank slate. In many ways, he makes more sensitive observations than he ever verbalized before his accident. He cannot problem solve, however, and can do very little for himself without help. His short term memory is shot, and he no longer talks very much since he now has aphasia. Sometimes it is hard for him to express himself, but since we are together most of the time I can usually help "put words in his mouth" so he can get it out. (He's always quick to tell me if I'm getting it wrong, however.)

I have put together a Special Needs Trust for him, since he is no longer capable of earning a living. He receives Social Security and Disability benefits which barely cover expenses. This Trust gives him a little security for his future needs, although it is not growing very quickly. This gifted artist who has worked as hard as he partied is now in need of everyone's generous help. He is still capable of worrying about the future even though he does not fully understand what has happened to alter it.

This is a tragic turn of events for a proud man. I hope people will visit the web page I made for him and donate what they can. The Trust is set up so that the money can only be spent on him. It cannot be used for rent, food or utilities, so we pool our meager resources to cover those.

He loves to get letters and postcards although he cannot write back. I try to send thank you notes and postcards to everyone who writes to him or donates to the Trust.

To some people this terrible injury may seem self-inflicted or his own fault and thus, less deserving of our help. But this iconic artist and extraordinary man needs all of the loving care, sympathy, and generosity his fellow man can spare.

The Trust address is www.sclaywilsontrust.com