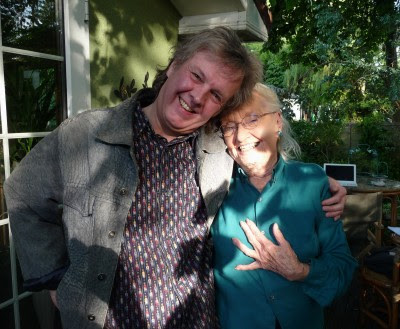 Another giant has fallen — another angel taken flight.

Carolyn Cassady has just left us to join Neal and Jack on that great road trip in the sky.
Her son John, the light of her life, was there by her side till the end.

After a year’s refusal of entry into the U.K., just 3 months ago he was able to return to England to be with her.

She was her regular rockin self up through Sunday, woke up with a tummy ache Monday morning, had an infected appendix, and checked out by Friday.

I hope I’m so lucky.  She was 90 years old and still drank her white wine and smoked her More menthol ciggies every day.

That is to say — she was living the life she chose, on her own terms, in her own house, until the very end.

Besides Neal, it’s my considered opinion she was also the love of Jack Kerouac’s life — and in life they pledged to be together in the next one.

Carolyn was spiritual, an intuitive channel, naturally smart, well educated, well read, independent, strong, creative, curious as all get-out, had an ethical sense of right and wrong, and was a helluva gifted portrait painter.  She grew up in a library of a house, with a biochemist father and English teacher mother, and intellectual discourse and reading were the orders of the day.

She got her BA as one of the first students at the revolutionary Bennington College in Vermont, then earned her MA in Theater and Fine Arts at the University of Denver, where she was living when she met Neal.

As I’ve mentioned before, Carolyn was the first of the (still unnamed generation of) Beats to move to San Francisco, and she was the reason Neal went there, which is why Jack went there, and so tumbled the dominoes of history.

I used to phone her at her cottage home in the forest around Windsor Castle every few months just to chat, and a little over a year ago she told me she didn’t expect to be here next year.

Since none of her three kids could get over there at that point, and I was sort of freed up for the first time with my mom just passing, I went and lived with her for 3 months, and boy did we have a good time!

When we first started hanging out in the early ’90s, we were having so much fun, it made me realize I could be doing this with my own mom, who was about the same age.  And for the next 15 years my mom and I took our adventure even further and were even better friends than we had been before — and it was thanks to Carolyn opening those doors wide so I could see how much possibility there was.

Carolyn was born a week after my mom in April, and died a week after her in September. I always wanted to get the two of them together but could never pull it off. Talk about fabulous roman candles exploding across the stars — those two together woulda lit up the night sky till dawn!

And she wasn’t just a surrogate mother to me, but was the den mother to the entire Beat Generation, the only one in that whole crazy krewe who maintained a home with kids and a garden — and a Kerouac bivouac under the backyard tree. And she remained a mother figure until the end to hundreds of fans who would email her, and she’d write every one back, always offering her advice and years of wisdom to any problem anyone else had.
She maintained a routine for at least the last decade of her life, where she would do emails in the morning, read from a stack of books beside her bed all afternoon, and at 5:00 it was okay to have a glass of wine and watch the local and then Beeb national news, then quiz shows or nature documentaries in the evenings.

She had shelves full of Beat movies that I went through and had us systematically watch every damn one, and we would hit pause and I could ask her any question and we’d go off on tangents and get another glass of wine and maybe watch another five minutes then something else would come up and it would take us about ten hours to get through one movie!

And she’d always say to whoever was talking in a documentary, “That isn’t how it was!” and be correcting the history as it’s being presented. And the best time was when she was yelling at the screen, “That’s completely wrong! You don’t know what you’re talking about!” and it was her being interviewed!   :-)

She is survived by her beloved son John Allen Cassady — named for Kerouac, Ginsberg and Neal — but she called him Johnny. As well as by her daughter Jami “Jack liked me best” Cassady-Ratto, and her first-born Cathy Sylvia, as well as her grandchildren Jamie, Becky and Bill, and her great-grandchildren Jon, Ellie, David, Bradley, Elizabeth and . . . Cody.

Carolyn rocked, but she also held down the Beat so others could solo.